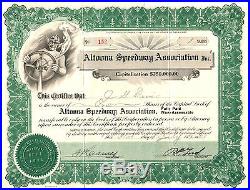 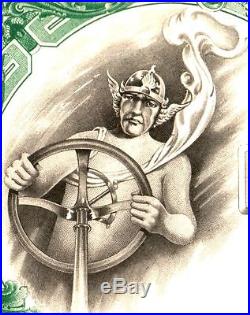 HISTORICAL RACE CAR COLLECTIBLE. THAT WILL MAKE YOUR HEART RACE! If you are into rare memorabilia related to race cars and car racing, here is something that you might like. In fact, we believe it is without equal. 8.5″ x 11″ and is beautifully engraved in green and black on buff paper with multiple antique fonts. The ornate green border houses a dark green embossed corporate seal which is flanked by the hand signatures of the Speedway President and Treasurer. The stock is fully issued yet remains completely UNCANCELLED – a true trophy for scripophily collectors! The center of attention is the most unusual and striking vignette (steel etched illustration) at the left. It shows a determined race car driver, nude but for a billowing scarf and a winged helmet, at an antique steering wheel! The helmet is something that might have appeared in the 1907 movie. Mint condition but for 2 folds and a few minor splits and dings in the top margin, which won’t show at all when matted and framed. When it’s gone, it’s gone forever. Thanks for racing down the Collect-a-thon Highway of History!! Circuit name: Altoona Speedway. Wood Oval: 1.250 miles. Dirt Oval: 1.125 miles. Track Banking – Wood Oval. Turns – 32 degrees. Track Built: Wood Oval – 1923. Destroyed by Fire -1936. Track Built: Dirt Oval – 1935. 40°38’0.90″N, 78°17’58.28″W. The Altoona Speedway at Tipton, Pennsylvania was the brainchild of George Long. Long organized the Altoona Speedway Association in 1921. The Association, which set about locating a suitable site for their racetrack. After chosing a site near Tipton the contract to buld the track was given to and Art Pillsbury to build the wooden track. The wooden track composed of roughly four million board feet of lumber that was laid in a large oval sixty feet wide and one and one-quarter mile length of two-by-fours standing on end. The ends were banked at a 32-degree angle. Arrangements were made with the American Automobile Association to set up dates for race events and the first race was held on 9, September 1923. That first race was a complete success, and the Altoona Speedway at Tipton became an overnight sensation for racing enthusiasts nationwide. In 1927 the A. Determined that a fourteen -foot center section, the entire length of the track would have to be replaced. The two-by-fours were set on edge and nailed to two-by-twelve sills. The usual Labor Day race went for a total of 250 miles, or 200 laps around the track. The constant pounding during the raced tended to rip up bits of the wood. Small red flags would be placed in the holes to warn the drivers of dangers, but by 1927 the track had to be replaced. The collapse of the stock market and many banks in 1929 forced the confiscation of many of the directors individual funds and caused many of them to declare bankruptcy. The banks could not be convinced to allow the speedway to continue operations in order to generate the dollars needed to repay the loans. The track remained closed until 1935 when an attempt was made to revive the business. The wooden track, despite the repairs made in 1928, had deteriorated from nonuse to the point that it was no longer safe for the races. A 1 1/8 mile dirt track was built inside the old track. The 1936 flood dammaged the track it was again refurbished and racing events were again held at the facility. After World War II, a 1/4 mile track was built in the infield, and this was used until 1952. The item “XXX-RARE & STRIKING ORIG UNCANC 1923 ALTOONA SPEEDWAY PA STOCK! RETAIL VAL $1000″ is in sale since Monday, August 20, 2012. This item is in the category “Sports Mem, Cards & Fan Shop\Fan Apparel & Souvenirs\Racing-NASCAR”. The seller is “collect-a-thon” and is located in New York, New York. This item can be shipped worldwide.