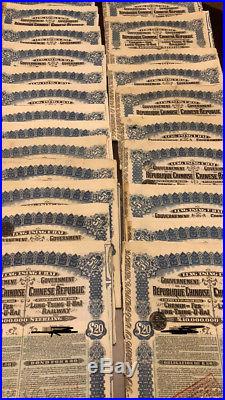 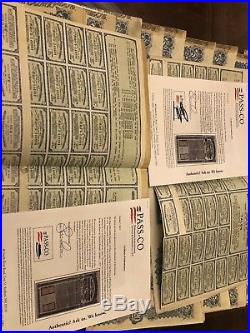 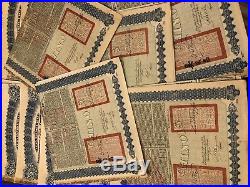 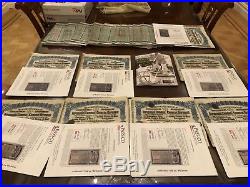 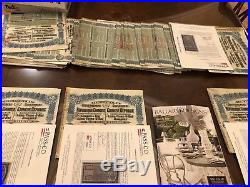 45 SUPER PETCHILI BONDS EACH WITH ALL REMAINING COUPONS (#83 to #154). And EACH AUTHENTICATED BY PASS-CO (Full Pass-Co Report included). The Lung-Tsing-U-Hai Railway is one of the most famous railroads of China. Lung-Tsing-U-Hai means KANSUH to SEA RAILWAY which ran between Lanchow-fu and Haichow. This bond was issued in 1913 to finance its construction and the redemption of the Pien Lo Railway Loans of 1905 and 1907 as well as improvement of the Haichow port. The loan was secured by the railroad’s revenues and was a direct obligation of the Government of the Republic of China which was founded only 2 years earlier. Its issuance was approved by the National Assembly of 1912, and the bond is signed by the top officials of the Chinese Government. Each bond has a face value of. Sterling or 500 Francs and was payable in GOLD. The railroad’s total capital was. However only 29,019 bonds were actually issued (Serial numbers 220,001 – 249,019) which makes them very rare. Fully issued bonds are potentially negotiable. These 23 are fully issued. However, 2 things happened that delayed its redemption. First, the founding of the Chinese Communist Party in 1921 which led to unstable political and economic conditions. Was the violent suppression of Communist Party organizations. By the military forces of Chiang Kai-shek and conservative factions. The Kuomintang, the Chinese Nationalist Party. That began the long and bloody civil war between the Nationalists and the Communists. The last coupon to be redeemed was in the 1939. The Government was so destabilized by then that it failed to pay interest on the bond from then on. Second, was the victory of the Communists and the birth of the Peoples’ Republic of China in 1949. The latter failed to redeem any of the sovereign debt of the previous government! The upshot of this story is that both the interest and principle due for Super Petchili bonds are legally still owed and outstanding! The Republic of China became the tiny nation of Taiwan (formerly Formosa) so it could be argued that Taiwan is responsible for their repayment. However, Mainland China does not recognize Taiwan’s independence and has never stopped insisting that it is part and parcel of China. Therefore, the ultimate debtor remains China itself. The “speculative” value of these bonds is rumored to be in the tens of millions of dollars. However, we do guarantee that these are 100% genuine and original 1913 Lung Tsing Railway bonds with all coupons remaining from 1940 through 1961. They remain in choice clean and crisp condition. If you are serious about making an investment that could reap immense benefits in the future, don’t hesitate to put in your best offer NOW. The item “HOARD OF 45 GENUINE ORIG SUPER PETCHILI (1913 LUNG TSING U HAI RWY) BONDS” is in sale since Wednesday, June 13, 2018. This item is in the category “Coins & Paper Money\Stocks & Bonds, Scripophily\World\Asia”. The seller is “electronicsctr” and is located in Brooklyn, New York. This item can be shipped worldwide.