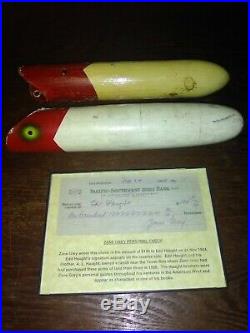 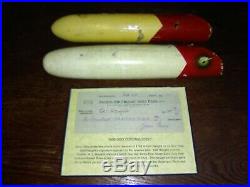 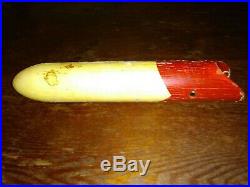 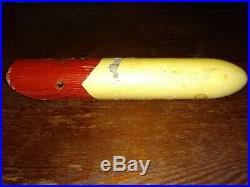 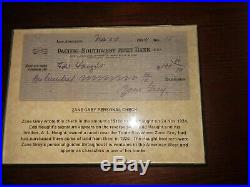 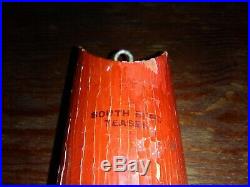 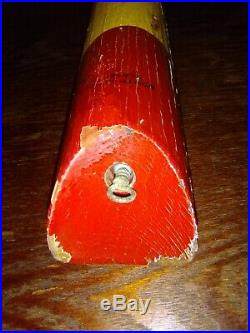 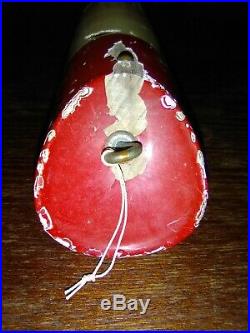 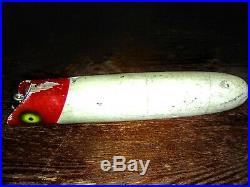 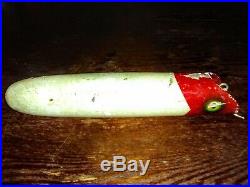 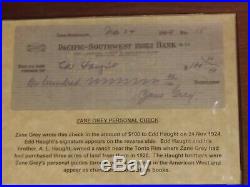 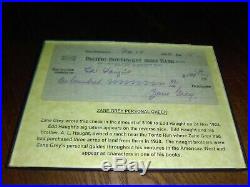 This sale is for two South Bend Bait Company Zane Grey Teaser Lures and a beautiful sogned check. Edd Haught’s signature appears on the reverse side. Edd Haught and his brother A. The Haught Bothers were Zane Grey’s personal guides throughout his ventures in the American West and appear as characters in one of his books. Also included in this sale are two South Bend Bait Company Tuna Teasers. These GIANT fishing lures are. The Haught Brothers were very instrumental in Zane Greys life. This check is one of the older ones that have surfaced and has a much greater significance too collectors of Zane Grey history. This check comes in a small glass frame for protection. Bank: Los Angeles Trust and Savings Six and Spring Sts. Size: 6 1/2in x 3in. Some History of the Zane Grey and Haught Family and Toronto Rim can be found at this website. These two Zane Grey Teasers are in well used condition. They were part of a serious fishing lure collection and came to me along with this check. I had them in a shadow box in my collection. The story of the Teaser is as follows. Zane Grey an iconic American, was given legendary status in the fishing community for his off shore escapades. Zane was said to have fished 300 days a year in his adult life. From the coast of Australia to the shores of Catalina Zanes epic battles are forever written in American as well as International fishing lore through his many novels or being the subject of other authors. While Zane is given and almost demi god status for pioneering fishing adventures, his movies, production of them and Western cult status rivaled that of many that ever appeared on film and in written word. The Zane Grey Teaser as stated above was 11 inches in length, and was made through many transitions, in company as well as lure variations. The antique lure can be found with Glass, Tack and painted eyes. The lure being a Teaser , unlike its smaller Tarp Oreno cousin, has no hooks to secure prey. The Teaser was only used as an attractant for the bait and switch style of fishing. Stated in the 1928 South Bend Bait Company lure Catalog. After several trips to Southern waters, Mr. Zane Grey, the famous salt water author and international authority on salt water fishing, designed the famous Zane Grey Teaser which is unusually effective for the very large species of Swordfish and Sailfish. Its size, its action in the water, its resistance in the water when trolling a good speed, and its coloration have all been worked out so that Mr. Grey pronounces it to be the best teaser ever developed. The Zane Gray Teaser was available in 5 catalogued colors. RH Red Head White Body. RHA Red Head Aluminum (Shown in the Gallery Below). The item “Zane Grey Author Fisherman signed Bank Check & South Bend Teaser Tuna Lure Pair” is in sale since Saturday, February 23, 2019. This item is in the category “Coins & Paper Money\Stocks & Bonds, Scripophily\Autographs”. The seller is “fclefmusic” and is located in Traverse City, Michigan. This item can be shipped worldwide.