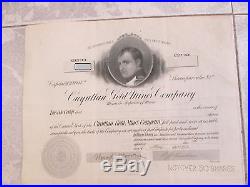 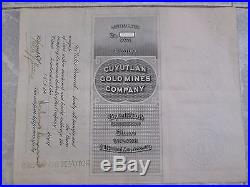 Cuyutlan Gold Mines Company. Issued 16 may 1913. Called Napoleon share because his portrait on it. 50 shares very scarce! The few still existing are for 25 shares. The gold mine was located in the Republic of Mexico, near Rosamorada, State of Nayarit. Dunham was a self-made-Man, he was principal owner of various mining companies in Mexico. Among others the Cuyutlan Gold Mines Co. The California gold mine, the Belmont Silver-Lead Properties in Santa Eulalia, the Fortuna and El Torro Gold Mines. He was vice president of the Pinos Altos Mining Co. In Chihuahua State and President south of Coalinga Medallion Oil Co. In the Kettleman Hills. While Cuyutlan a beautiful resort is located 20 minutes from Mazatlan today, it was in the early years of the 20th century. A wild and tangled mining center. Vignette with Napoleon Bonaparte, original signature William Peyton Dunham as president. A few pin holes but nothing serious. The item “CUYUTLAN GOLD MINING Co” is in sale since Monday, July 04, 2016. This item is in the category “Coins & Paper Money\Stocks & Bonds, Scripophily\Mining”. The seller is “rocanroll” and is located in Granada. This item can be shipped worldwide.