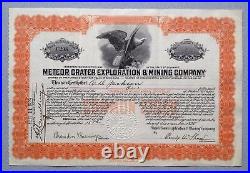 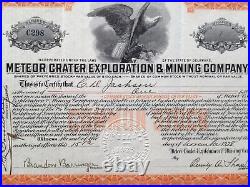 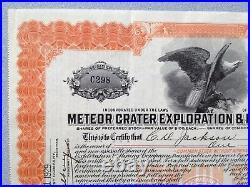 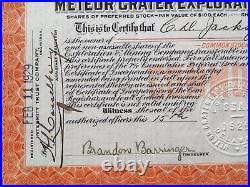 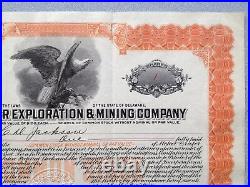 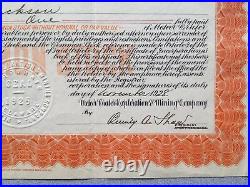 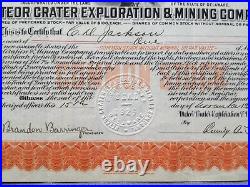 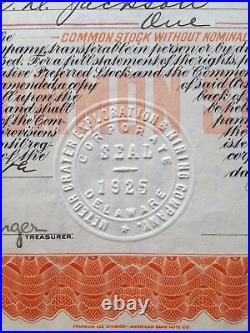 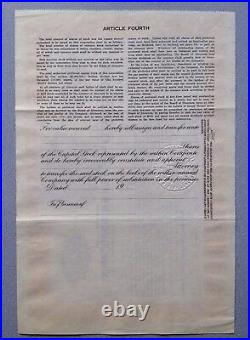 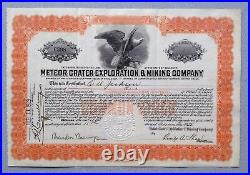 Meteor Crater Exploration & Mining Company original common stock certificate. In 1902, Daniel Moreau Barringer, a mining engineer, became very interested in a crater in Northern Arizona as a potential source for mining iron and nickel. Barringer believed that the crater was formed by a large meteorite impact and thought that the meteorite itself was buried deep beneath the crater floor. Barringer soon began making plans to mine the crater and filed four placer mining claims with the United States government (nearly 10 years before Arizona became a state), thus obtaining ownership over the two square miles containing the crater in the northern Arizona desert. Barringer spent the next 26 years attempting to find/mine what he believed would be a giant iron meteorite. He estimated the meteorite would weigh approximately 10 million tons and would contain huge quantities of iron and nickel. However, what he did not know was that the meteorite likely mostly disintegrated upon impact with the Earth, through vaporization, melting, and fragmentation. In 1925, the Meteor Crater Exploration & Mining Company was incorporated in Delaware to raise more capital to continue and expand Barringer’s mining efforts. Drilling was started on the south rim of the crater and at a depth of 1,250 feet, Barringer reported increasing numbers of oxidized meteorite fragments. Days and weeks soon began to pass with little progress in deepening the drill hole however. Eventually, the drill bit jammed completely and the cable broke. Exploration of the crater was finally abandoned in late 1929, as all funds were exhausted and the potential for additional investors ceased, especially with the Great Depression setting in across the nation. Barringer died the following year. The property is still owned by the Barringer family, but is under the management of Meteor Crater Enterprises. Meteor Crater Enterprises now operates a museum and tourist center on the rim of the crater. The Meteor Crater Exploration & Mining Company common stock certificate for sale here. Signifies the issuing of 1 share in the Meteor Crater Exploration & Mining Company to C. Jackson in November 1928. Is signed on the front by Brandon Barringer and Quincy A. Shaw and features the corporate seal. Was printed by the Franklin Lee Division of American Bank Note Co. Is an extremely rare piece of meteorite and mining history. Is in very good condition with some minor wear consistent with age (slight fading, age spots, bent corner). Please see photos and do not hesitate to ask any questions you may have. This item is in the category “Coins & Paper Money\Stocks & Bonds, Scripophily\Mining”. The seller is “boldventures” and is located in this country: US. This item can be shipped to United States, Canada.