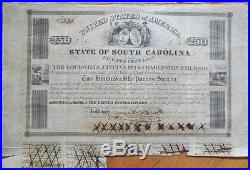 This is a stunning, exceptionally early bond from the’State of South Carolina, The Louisville, Cincinnati & Charleston Rail Road. It was issued in 1838 for 250 Pounds Sterling and has three vignettes. Printed by Draper, Toppan, Longacre & Co. Philadelphia & New York. It measures about 12.75″ x 7.25″ not including the coupons on the bottom and is in generally clean condition with only extremely minor wear. This is the earliest-known railroad bond. An excerpt from a piece by Stephen L. Goldsmith and Douglas Ball. It was then the longest line in America. In 1835, hoping to further improve the transportation of cotton from the Deep South northward, a new railroad was chartered, the Louisville, Cincinnati & Charleston. These are the first known state guaranteed railroad bonds. Because of the steadily worsening condition of the Bank of the United States, a second group of bonds was issued through a different agency, of the House of Mess. Palmer, Mackillop, Dent & Co. In his capacity as State Comptroller, William E. Hayne signed the back of each bond. His father, Robert Young Hayne, signed as president of the railroad. He was noted for his brilliant debate with Daniel Webster over the Nullification Doctrine in the Tariff Controversy of 1832. See my OTHER STOCKS AND BONDS! GUARANTEED ORIGINAL – NO REPRODUCTIONS! The item “1838 Stock/Bond Certificate’Louisville, Cincinnati & Charleston Railroad” is in sale since Monday, March 17, 2014. This item is in the category “Coins & Paper Money\Stocks & Bonds, Scripophily\Transportation\Railroads”. The seller is “gold-coast” and is located in Brentwood, Tennessee. This item can be shipped worldwide.