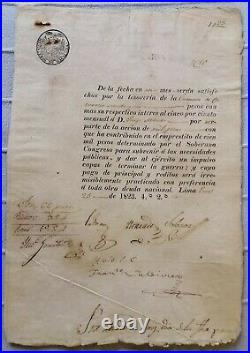 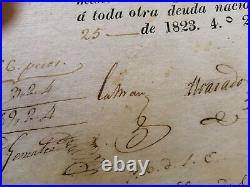 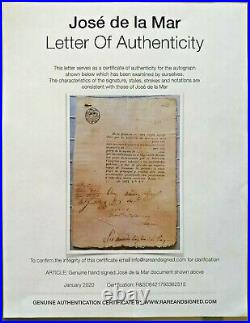 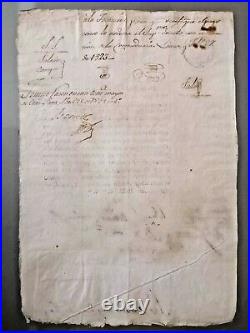 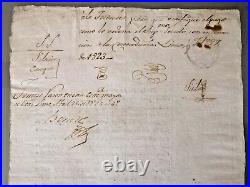 A printed document with manuscript insertions, a rare hand signature of José de la Mar (an ecuadorian predecessor of independence and “Libertador”) and others, black stamp of the Ministerio de Hacienda (Treasury). CONDITION: Used – rosty clip hole. Please look at the images! Courier service on demand. Please wait for our invoice. Your articles will be carefully packed and handled. Please feel free to contact me for any further questions. Please give the postal and custom services enough time to do their work. Thank you very much for your comprehension. José de la Mar. 2nd and 8th President of Peru. In office August 22, 1827 June 7, 1829. Manuel Salazar y Baquíjano. Antonio Gutiérrez de la Fuente. In office September 22, 1822 February 27, 1823. Francisco Xavier de Luna Pizarro. José Bernardo de Tagle, Marquis of Torre-Tagle. May 12, 1778 Cuenca. October 11, 1830 (aged 52) San José. José Domingo de la Merced de la Mar y Cortázar. (May 12, 1778 October 11, 1830) was a Spanish and. Military leader and politician who served as the second and eighth. De la Mar was born in. In what today is. With the help of his influential uncle, de la Mar entered the Spanish army as a sub-lieutenant of the. In 1794 he participated in the campaign of Roussillon against the French Republic, fighting under the command of Count of Conquest, after which he was promoted to captain (1795). Then participated in various military actions against revolutionary France, and was already a lieutenant colonel in the time of Spain’s national war against Napoleon’s invasion (1808). He participated in the defense of Zaragoza next to the Colonel Palafox (1808 – 1809). Was seriously injured, and although that city finally capitulated, earned the title of “Hero of the nation in a heroic” and promotion to colonel. In 1812 he transferred to the front of Valencia, led by General Joaquín Blake, and sent a column of 4,000 veterans grenadiers (the “column The Sea”). Again he was wounded, and was taken to hospital in Tudela, where he was captured by the French. No sooner was recovered was taken to France and confined in the castle of Saumur (Burgundy), where he studied the classics of French culture. After a time managed to escape, accompanied by Brigadier Juan María Muñoz and Manito, crossed Switzerland and the Tyrol and reached the port of Trieste, on the Adriatic Sea, where he sailed back to Spain. Promoted him to Brigadier, awarded him the Saint Hermenegildo’s Cross and appointed him Sub-Inspector of the. With the title of Governor of. He arrived at the city in 1816. In 1819, he was promoted to field marshal. The War of Independence (18211827). During the early days of the. Peruvian War of Independence. He joined forces with the Royalists, taking care of the. In the main port of the. José de la Serna. Abandoned the capital on June 6, 1821, leaving him with explicit orders to resist and wait for reinforcements. He successfully stopped all attempts to capture the fort for nearly 4 months, until the arrival of General. And a powerful division sent by Viceroy de la Serna gave him the orders to surrender the fort due to the lack of supplies and troops. On September 19, the garnison surrendered, in the. Only two days after de la Mar finally submitted his left foot to amputation, having initially refused treatment of a gangrenous toe. After the Baquijano Capitulation, de la Mar joined forces with the rebel cause. José de San Martín. Awarded him with the title of “Division General”, a title he accepted reluctantly. De la Mar served as one of three men on the Supreme Governing Board of the Republic of Peru from September 22, 1822 to February 27, 1823. He served as the President of the Congress. From November 1823 to December 1823. De la Mar served as the Constitutional President of the Republic of Peru from August 22, 1827 to June 7, 1829. He was removed from the Presidency of Peru after less than two years by a coup d’état led by General Agustín Gamarra. And died in forced exile in Costa Rica. The item “ECUADOR autograph Jose de la Mar president on Peru loan in independence war 1823″ is in sale since Saturday, January 18, 2020. This item is in the category “Collectibles\Autographs\Political\Presidential”. The seller is “kaiu” and is located in Jalisco state. This item can be shipped worldwide.