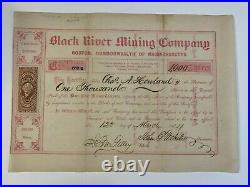 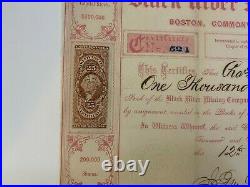 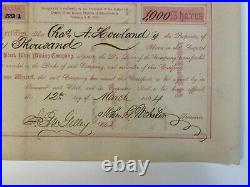 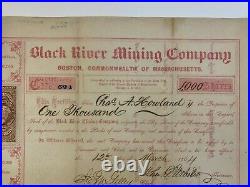 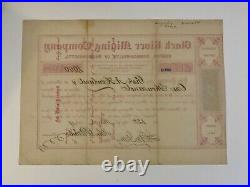 1864 Black River Mining Company Stock Certificate. Company had mines in the Gogebic Range, near Ironwood, Michigan. Extremely rare Civil War-Era Michigan copper mining stock! Certificate is issued to Charles Howland for 1,000 shares on March 12, 1864. Hand-signed by company President John G. Civil War R44c revenue stamp on front. Several years later the company would be run by Alexander Maitland, a prominent citizen of the Michigan Upper Peninsula, with substantial early mining and banking interests in Michigan. The Gogebic Range is an elongated area of iron ore deposits located within a range of hills in northern Michigan and Wisconsin just south of Lake Superior. It extends from Lake Namakagon in Wisconsin eastward to Lake Gogebic in Michigan, or almost 80 miles. Though long, it is only about a half mile wide and forms a crescent concave to the southeast. The Gogebic Range includes the communities of Ironwood in Michigan, plus Mellen and Hurley in Wisconsin. The name Gogebic is Ojibwa for where trout rising to the surface make rings in the water. “Range” is the term commonly used for such iron ore areas around Lake Superior. In Wisconsin, the Gogebic Range is often called the Penokee Range. The range is named after Lake Gogebic, a large lake near the east end of the range in Gogebic and Ontonagon Counties in Michigan. Located within the southern of two parallel prominent ridges, the Gogebic range iron formation name is often used interchangeably with the range of hills that encompass it. The hills composing the Gogebic range vary from 100 to 600 feet above the surrounding terrain and are a prominent landform visible for miles. The Gabbro, or Trap Range comprises a somewhat lower ridge of hills running parallel just to the north of the Gogebic Range. Since the two ranges of hills are made up of dissimilar rock types, the rock formation containing the iron ore deposits is located exclusively within the southern (Gogebic) Range. The Gogebic Range experienced a speculative iron boom in the mid-1880s and had recurring booms and busts from 1884 to 1967 as demand shifted. Thousands of immigrants and their families arrived in the region to work in the mines. The immigrants were mostly Finnish, Swedish, Italian, French-Canadian, Austrian, and English ethnicities. Many of the settlers had prior mining experience in their home countries and were actively recruited by the mining companies in Europe. The influx of settlers created a population boom in the region and helped establish numerous communities in the Gogebic Range. For decades in the late 19th century and into the 1920s, the Gogebic was one of the nation’s chief sources of iron. Iron from the Gogebic helped to fuel the industrial boom in the Upper Midwest during these years. By 1930 mining was winding down in the area. The mines began closing as the national economy suffered from the Great Depression. The result was widespread economic devastation in the communities of the Gogebic Range. Some mines continued to operate into the 1960s, but the volume never reached the same levels as in the earlier boom years. Approximately 325 million tons of this ore was mined from around 40 individual mines between 1877 and 1967. Iron mines of the era exploited the “natural” (soft) iron-rich ores in a 15-kilometer-long stretch in the central portion of the range straddling the Michigan-Wisconsin state line. These mines were mainly of the underground shaft type, which were among the deepest iron mines in the country. Due to these characteristics, and the greater associated costs involved with extracting the ore, these mines were unable to compete economically with the larger open pit iron mines in northern Minnesota and elsewhere. I will combine multiple items into one package, but you must wait for an invoice! All certificates are originals, I do not sell reproductions. Stocks may have pinholes, tears, etc. Certificate shown is exact certificate you will receive, we don’t use stock photos. This item is in the category “Coins & Paper Money\Stocks & Bonds, Scripophily\Mining”. The seller is “mac2735″ and is located in this country: US. This item can be shipped worldwide.