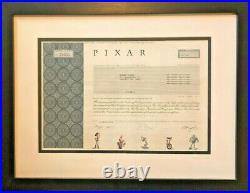 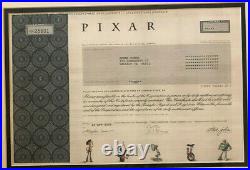 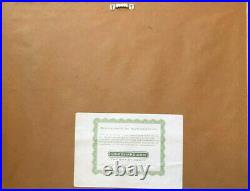 Old Stock Yard Collectible Stock and Bond Certificates. P I X A R. Original stock certificate, matted and framed. Founded by Steve Jobs (Steve Jobs signature is printed on the certificate). Subsequently acquired by, and now part of, The Walt Disney Company Attractive certificate with vignettes of PIXAR characters. Pixar Animation Studios (also known as simply Pixar) (/pksr/) is an American computer animation studio based in Emeryville, California, a subsidiary of Walt Disney Studios (owned by The Walt Disney Company). Pixar began in 1979 as part of the Lucasfilm computer division, when it was called the Graphics Group, before its spin-off as a corporation on February 3, 1986, with funding from Apple co-founder Steve Jobs, who became the majority shareholder. Although the company started with short films, Pixar is best known for producing high quality, visually impressive CGI-animated feature films technologically powered by RenderMan, the company’s own implementation of the industry-standard RenderMan Interface Specification image-rendering application programming interface. A character from the studio’s 1986 short film of the same name, is the studio’s mascot. Pixar has produced 21 feature films, beginning with Toy Story in 1995, which was the first-ever computer-animated feature film; its most recent film was Toy Story 4 (2019). All of the studio’s films have debuted with CinemaScore ratings of at least an “A, ” which indicates a positive reception with audiences. The studio has also produced dozens of short films. Moreover, 15 of Pixar’s films are in the 50 highest-grossing animated films of all time. The studio has earned 19 Academy Awards, 8 Golden Globe Awards, and 11 Grammy Awards, along with numerous other awards and acknowledgments. Many of Pixar’s films have been nominated for the Academy Award for Best Animated Feature, since its inauguration in 2001, with the nine Pixar winners being: Finding Nemo (2003), The Incredibles (2004), Ratatouille (2007), WALL-E (2008), Up (2009), Toy Story 3 (2010), Brave (2012), Inside Out (2015), and Coco (2017); the three that were nominated for the award without winning it are Monsters, Inc. (2001), Cars (2006), and Incredibles 2 (2018). In addition to that award, Up and Toy Story 3 were also the second and third animated films, respectively, to be nominated for the more inclusive Academy Award for Best Picture (the first being Walt Disney Animation Studios’ Beauty and the Beast in 1991). Old Stock Yard Policies and FAQs. Items are sent via U. Usually first class, but occasionally priority or parcel post. Policy, my listings are setup to accept. Are you your certificates authentic or copies? Everything I sell is original and authentic. I do not sell copies or reproductions. Is the certificate pictured the exact one I will receive? Occasionally, I do list certificates of the same type without rescanning. In this case, the certificate you receive will be virtually identical same color, size, vignette, etc. To the one pictured. What is the best way to store, protect, and display my certificate collection? The best thing, by far, that I have come across for storing certificates are profolios and sleeves made by Itoya. I have several sizes available. Do the certificates you sell have financial value? The item “Pixar animated studios stock certificate Steve Jobs founded now part of Disney” is in sale since Saturday, December 5, 2020. This item is in the category “Coins & Paper Money\Stocks & Bonds, Scripophily\Entertainment & Sports”. The seller is “oldstockyard” and is located in Saint Augustine, Florida. This item can be shipped worldwide.