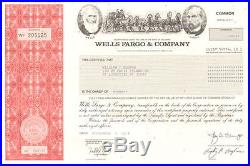 Old Stock Yard Collectible Stock and Bond Certificates. Wells Fargo & Company. One of the Big 4 Banks. Attractive certificate with beautiful vignette. Wells Fargo & Company is an American multinational banking and financial services holding company which is headquartered in San Francisco, California, with “hubquarters” throughout the country. It is the largest bank in the world by market value. It is the fourth largest bank in the U. By assets and the largest bank by market capitalization. Wells Fargo is the second largest bank in deposits, home mortgage servicing, and debit cards. Wells Fargo ranked 10th among the Forbes Global 2000 (2015) and the 30th largest company in the United States, according to Fortune 500 (2015). The firm’s primary U. Operating subsidiary is national bank Wells Fargo Bank, N. Which designates its main office as Sioux Falls, South Dakota. Wells Fargo in its present form is a result of a merger between San Franciscobased Wells Fargo & Company and Minneapolis-based Norwest Corporation in 1998 and the subsequent 2008 acquisition of Charlotte-based Wachovia. Following the mergers, the company transferred its headquarters to Wells Fargo’s headquarters in San Francisco and merged its operating subsidiary with Wells Fargo’s operating subsidiary in Sioux Falls. Wells Fargo is one of the “Big Four Banks” of the United States, along with JPMorgan Chase, Bank of America, and Citigroupits main competitors. The company operates across 35 countries and has over 70 million customers globally. In 2012, it had more than 9,000 retail branches and over 12,000 automated teller machines in 39 states and the District of Columbia. In July, 2015, Wells Fargo became the world’s largest bank by market capitalization, edging past ICBC. In February 2014 Wells Fargo was named the world’s most valuable bank brand for the second year running in The Banker and Brand Finance study of the top 500 banking brands. Old Stock Yard Policies and FAQs. Items are sent via U. Usually first class, but occasionally priority or parcel post. Policy, my listings are setup to accept. Are you your certificates authentic or copies? Everything I sell is original and authentic. I do not sell copies or reproductions. Is the certificate pictured the exact one I will receive? Occasionally, I do list certificates of the same type without rescanning. In this case, the certificate you receive will be virtually identical same color, size, vignette, etc. To the one pictured. What is the best way to store, protect, and display my certificate collection? The best thing, by far, that I have come across for storing certificates are profolios and sleeves made by Itoya. I have several sizes available. Do the certificates you sell have financial value? The item “Wells Fargo & Company Big 4 Bank stock certificate” is in sale since Thursday, August 24, 2017. This item is in the category “Coins & Paper Money\Stocks & Bonds, Scripophily\Financial Institutions”. The seller is “oldstockyard” and is located in Saint Augustine, Florida. This item can be shipped worldwide.