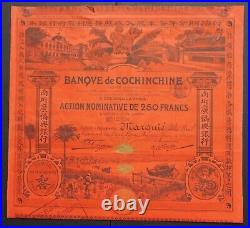 China/Vietnam – Banque de Cochinchine – 1908 – share in name for 250 francs RARE. The Banque de l’Indochine, originally Banque de l’Indo-Chine (“Bank of Indochina”), was a bank created in 1875 in Paris to finance French colonial development in Asia. As a bank of issue in Indochina until 1952 (and in French Pacific territories until 1967), with many features of a central bank, it played a major role in the financial history of French Indochina, French India, New Caledonia, French Polynesia, and Djibouti, as well as French-backed ventures in Siam and China. After World War II, it lost its issuance privilege but reinvented itself as an investment bank in France, and developed new ventures in other countries such as Saudi Arabia and South Africa. The Compagnie Financière de Suez acquired a controlling interest in the Banque de l’Indochine in 1972, then merged it in 1975 with its own banking subsidiary to form Banque Indosuez, since 1996 itself part of the Crédit Agricole universal banking group. Type : share in name. Quality : VF, folded, small tear (see photo). 100 – 350 grams. This item is in the category “Coins & Paper Money\Stocks & Bonds, Scripophily\World\Americas”. The seller is “jjursem” and is located in this country: NL. This item can be shipped worldwide.