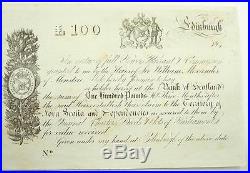 100 pound warrant or bond certificate of Alexander Humphrys, circa 1840’s. Warrants payable by the Bank of Scotland, Edinburgh, Scotland. He claimed to be the heir to the titles of William Alexander of Menstrie (1st Earl of Stirling, a Scottish courtier and poet who was involved in the Scottish colonisation of Port Royal, Nova Scotia and Long Island, New York) and rightful claimant to the estates of Nova Scotia. Measures approximately 10 1/8″ x 5 9/16″ in size. Has small holes on the right side, age toning, etc. Otherwise in good condition. Reads: In virtue of full Powers, Warrant & Commission granted to me by the Heirs of Sir William Alexander of Monstrie, I do hereby promise to pay……… Or holder hereof at the (Bank of Scotland) the sum of One Hundred Pounds Stg. Three months after the said Heirs establish their claim to the Territory of Nova Scotia and Dependencies as secured to them by the Original Charters, Deeds & Acts of Parliament for value received given under my hand at Edinburgh of the above date. Please check the Canada post website. The item “100 Pound Warrant / Bond Certificate of Alexander Humphrys c. 1840’s” is in sale since Friday, February 12, 2016. This item is in the category “Coins & Paper Money\Stocks & Bonds, Scripophily\Other Scripophily”. The seller is “maplevillage” and is located in Victoria, British Columbia. This item can be shipped worldwide.