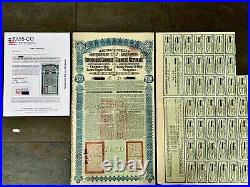 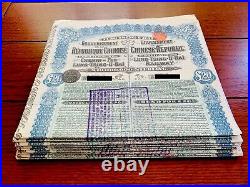 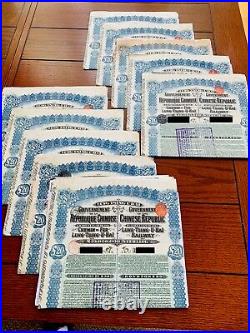 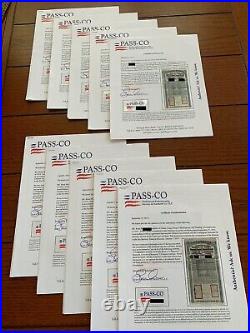 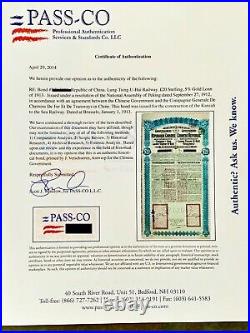 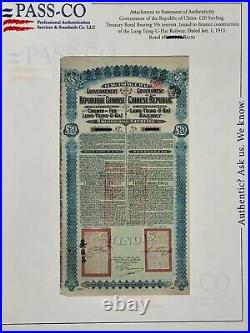 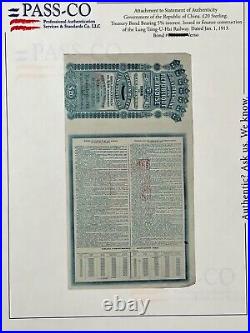 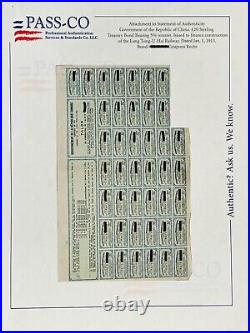 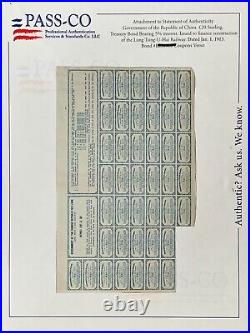 Each Bond we sell has all coupons and have a PASS-CO Certificate of Authenticity. To protect the security of the Bonds we have edited the photos to cover the Bond Serial numbers. PASS-CO Authentication Certificates are included with Each Bond. The Lung Tsing U Hai Railway Bonds are commonly known as The Super Petchili Bonds. The bonds were approved by the Chinese National Assembly of 1912 and issued in 1913 as a direct obligation of the Government of the Republic of China. Redemption of the bonds was delayed due to the Shanghai massacre of 1927 and the subsequent civil war between the Nationalists and the Communists. In Brussels and Paris on behalf of the Co. Chemins de Fer et de Tramways en Chine. The ornate and large format bonds are distinctive foreign issue bonds and represent a unique and rare collector item. Titles and Text: Repeated in French and English. Size: Large Format, 11×20″ plus 10×20″ Coupons. While the bonds represented a binding obligation upon the government of The Republic of China, and its successors, China defaulted in 1938 and left thousands of global creditors unpaid even to this day. According to the terms of the bonds, the holders can hold modern day China accountable for these obligations – but any help the bondholder might expect from their respective government has been on hold since 1938. However, there is international precedent for such redemptions: In 1987 Prime Minister Margaret Thatcher ordered Beijing to make good on the bonds owned to British citizens or lose access to the British capital markets. Then Chinese President Li Xiannian’s government obliged, reaching a settlement of 23.5 million British pounds. Two concurrent resolutions were presented to the US Congress; H. 110 by Rep Mark Green (R-TN) and S. Martha McSally (R-AZ). Expressing the sense of Congress that the President should do everything in his power to achieve resolution and repayment of the defaulted. Of the People’s Republic of China held by 20,000 families in the United States represented by the American Bondholders Foundation, LLC. The benefit of the bondholders and the people of the United States. In the unlikely event that the current Chinese Government did decide to honor the outstanding debts from the previous Chinese administrations then these unredeemed bearer bonds may have substantial value. “Fox6 News China Bonds” and “Bloomberg 1913 China Bonds”. This item is in the category “Coins & Paper Money\Stocks & Bonds, Scripophily\Government & War Bonds”. The seller is “mwv50″ and is located in this country: US. This item can be shipped to United States, Canada, United Kingdom, Denmark, Romania, Slovakia, Bulgaria, Czech Republic, Finland, Hungary, Latvia, Lithuania, Malta, Estonia, Greece, Portugal, Cyprus, Slovenia, Sweden, Belgium, France, Ireland, Netherlands, Poland, Spain, Italy, Germany, Austria, Mexico, Switzerland, Norway, Croatia, Republic of, Bermuda, Guernsey, Gibraltar, Iceland, Jersey, Liechtenstein, Luxembourg, Monaco.