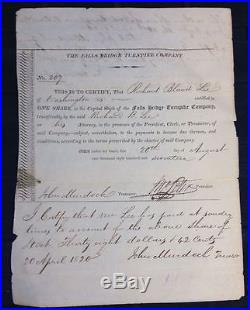 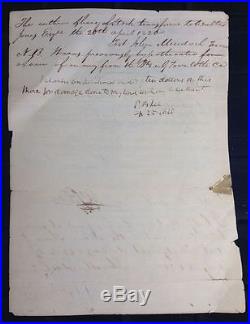 1817 Richard Bland Lee Falls Bridge Turnpike Company Stock Certificate. 1817 Falls Bridge Turnpike Company Stock Certificate. Signed by Richard Bland Lee. A significant Northern Virginia Document. Richard Bland Lee (January 20, 1761 March 12, 1827) was a planter, jurist, and politician from Fairfax County, Virginia. He was the son of Henry Lee II (17301787) of Leesylvania and Lucy Grymes (17341792), as well as a younger brother of both Maj. Henry (“Light Horse Harry”) Lee (17561818) and of Charles Lee (17581815), Attorney General of the United States from 1795 to 1801, who served in both the Washington and Adams administrations. He is also an uncle to our esteemed Robert E. Richard Bland Lee the third son of Henry Lee II who was the grandfather of Robert E. Lee and Lucy Grymes was born on January 20, 1761 at “Leesylvania”, the estate built by his father on land overlooking the Potomac River in Prince William County, Virginia. He was named after two distinguished relatives, his great-grandfather Richard Bland of “Jordan’s Point”, and his great-uncle, jurist and statesman Richard Bland, whom Thomas Jefferson called “the wisest man south of the James”. Possibly educated as a youth at “Chantilly”, the home of his venerated cousin Richard Henry Lee in Westmoreland County, Virginia, Richard was enrolled at the College of William and Mary in 1779. On March 3, 1789 Richard Bland Lee began service as the first representative of Northern Virginia in the United States House of Representatives. He served three terms as a Pro-Administration (federalist) member of congress from 1789 to 1795. Upon his death in 1787, Henry Lee II bequeathed 3,000 acres 12 km. Of his Cub Run estates to be equally divided between his sons Richard Bland and Theodorick. Being the older of the two, Richard was given the more alluvial northern half, on which he already resided, having lived there as manager of the estate since approximately 1781. Before he left for Congress in 1789, Richard had chosen a name for his estate, Sully. The exact origin of the name is unknown, though Robert S. Sully: Biography of a House. Speculates that Sully was named after “Chateau de Sully” in the Valley of Loire in France. According to Gamble, if he turned to a specific source, it was doubtless the. Of Maximilien de Bethune, Duke of Sully and France’s Minister of Finance under Henry IV. This work was well known among wealthy Virginians in the late 18th century. [Believe it or not, this book is still available at BN. Com]. Driven into significant debt trying to aid his brothers Maj. Richard Bland and Elizabeth Lee initially moved to a home in Alexandria, then to a country home called Strawberry Vale near Scott’s Run [1] (current site of Tysons Corner), and finally to the historic Thomas Law House at Sixth and N Streets, Southwest in Washington, DC. “Sully” is located at Chantilly, just off U. Route 50, on State Route 28, the southern access road to Dulles International Airport. It is owned and operated as a museum house by the Fairfax County Park Authority. Richard died in Washington, D. And was buried in the Congressional Cemetery there in 1827. In 1975 he was reinterred at his home, the. His home is now open to visitors as a county park. Special thanks for wikipedia as the bulk of this source. AS ALWAYS, THE ITEM PICTURED IS THE ITEM YOU WILL RECEIVE. WE ARE FULL TIME COIN AND CURRENCY DEALERS. Open T-F 11-7, Sat 10-6. The item “1817 Richard Bland Lee Falls Bridge Turnpike Company Stock Certificate” is in sale since Thursday, June 23, 2016. This item is in the category “Coins & Paper Money\Stocks & Bonds, Scripophily\Transportation\Railroads”. The seller is “pennypincherva” and is located in Fairfax, Virginia. This item can be shipped to United States, to Canada, to United Kingdom, DK, RO, SK, BG, CZ, FI, HU, LV, LT, MT, EE, to Australia, GR, PT, CY, SI, SE, ID, TH, to Belgium, to France, to Hong Kong, to Ireland, to Netherlands, PL, to Spain, to Italy, to Germany, to Austria, to New Zealand, SG, to Switzerland, NO, SA, UA, AE, QA, BH, HR, MY, CO, CR, PA, TT, GT, HN.