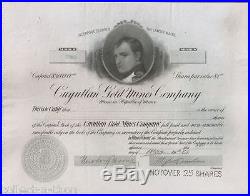 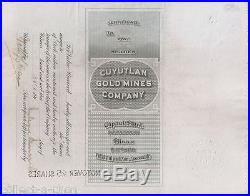 THE RAREST “NAPOLEON” ON EARTH! There are numerous rare coins, medals and banknotes bearing the likeness of Napoleon. But none comes close to the rarity and history of this, THE most elusive Mexican Mining Bond! Issued in 1913 by the Cuyutlan Gold Mining Co. This bond bears the likeness of Napoleon Bonaparte. THE ONE AND ONLY NAPOLEON BOND! Issued 16 of May 1913. Signed by President William Peyton Dunham and Treasurer. Striking vignette portrait of Napoleon Bonaparte. No border, with black print on white paper. Dunham was a self-made success story who was chief owner (and sometimes principal stockholder) of various mining enterprises in Mexico. These included the Cuyutlan Gold Mining Co. (most likely near Rosamorada in the state of Nayarit, Mexico), the California Gold Mine, Belmont silver-lead properties in Santa Eulalia, the Fortuna and El Torro gold mines, and several others. He was vice president of the Pinos Altos Mining Co. In the state of Chihuahua and President of Medallion Oil Co. In the Kettleman Hills south of Coalinga. While today Cuyutlan is a beautiful resort area 20 minutes from Mazatlan, in the early days of the 20th century it was a wild and woolly mining center. The following story brings to light some of the risks associated with mining in Old Mexico in the early part of the 20th century. On March 19, 1918, Mexican bandits kidnapped American citizen Gustavus A. Whiteford (Superintendent) at the Cuyutlan gold mine near Rosamorada, State of Nayarit, Mexico. Several weeks later, on April 7, the same bandits captured naturalized American citizen Otto Land (Superintendent) at the El Frontal Mine, also near Rosamorada. Despite receiving the demanded ransom for Whiteford, General Felix Diaz, a nearly blind twenty-four-year-old leader of virtually all bandits operating in Nayarit, did not release Whiteford. This Felix Diaz was no relation of the nephew of President Porfirio Diaz. On May 24, 1918, while Diaz was away from the camp where the prisoners were held, Whiteford attempted a second escape from his captors, but was caught and subsequently murdered by several drunken bandits. Also at this time, the bandits cut off the right index finger of the now-dead Whiteford and an index finger of the still-living Land. These were then sent to Delius y Cia, a German concern at Tepic, with a note stating that the amputation of fingers would continue until the ransom demands were paid; the fingers subsequently came into possession of the State Department from efforts to gain restitution from the Mexican government. On September 25, 1918, Land gained his release from Diaz by promising to pay fifteen hundred pesos, which he subsequently did. Land died on September 9, 1919. Despite repeated diplomatic efforts to bring the responsible bandits to justice, only Diaz appears to have reaped what he sowed. On March 17, 1922, Diaz was killed while trying to escape from federal soldiers taking him to a court martial unrelated to this banditry. This amazing story is part of the LIVING HISTORY of this amazing Mexican rarity, which is seldom if ever offered. Don’t miss this chance to acquire it now. It could be DECADES before you see another one – if ever! The item “DRASTICALLY RARE MEXICO NAPOLEON BOND! DON’T MISS THIS 1-IN-A-LIFETIME CHANCE” is in sale since Tuesday, September 29, 2015. This item is in the category “Coins & Paper Money\Stocks & Bonds, Scripophily\World\Americas”. The seller is “collect-a-thon” and is located in New York, New York. This item can be shipped worldwide.