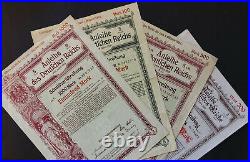 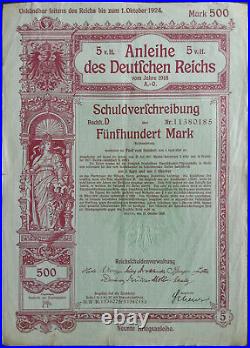 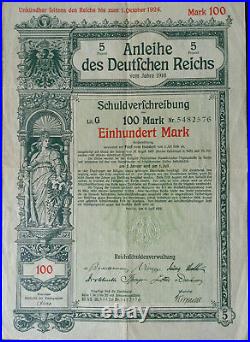 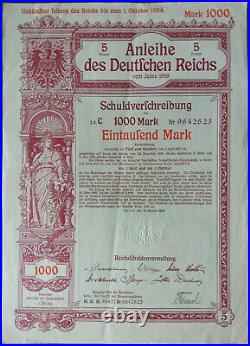 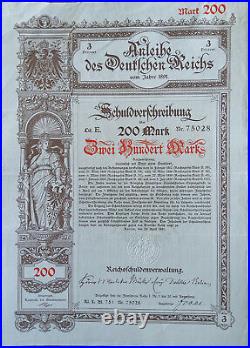 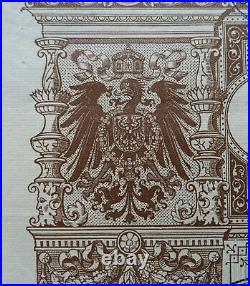 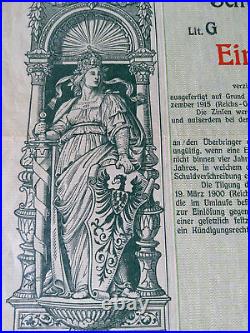 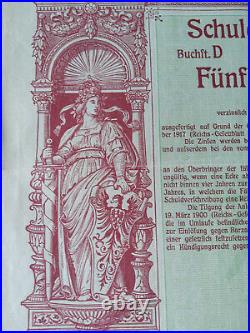 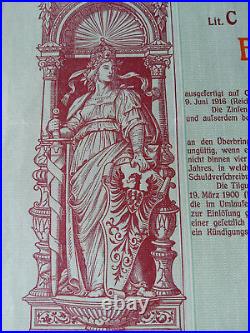 Decorative print with Germania – RARE – early issue with complete sheet of interest coupons, not validated. The other 3 have no coupons. There are 4 different kinds; 100, 200, 500, and the 1000. ### Original bond – see scans – for 3% and the others 5 % of the German Empire Marks, Berlin April 29, 1891. In 1871 the German Empire was founded. With the French war indemnity, the war debts from 1870/71 could largely be paid off. To raise funds further, the first loan law of the German Empire was enacted on January 27, 1875, and a new loan was issued every year from 1877 onwards. Until 1885, the bonds carried interest of 4%, after that only 3.5%. In 1890 the first 3% interest-bearing bond appeared. With the 9th war loan from October 1918, the debt of the German Empire ended. Decorative print of Germania with sword and shield, above it a picture of the old imperial eagle with crown, as well as a large underprint plus embossing stamp. Ith letter watermarks REICH etc. RARE SPECIAL FEATURE: Sheet of interest coupons (20 coupons including talon)from 1922 to 1931 – not validated – paper, slight middle folds in neat condition: VF. Nice Historical object’s. This item is in the category “Coins & Paper Money\Stocks & Bonds, Scripophily\Other Scripophily”. The seller is “scripophyl” and is located in this country: NL. This item can be shipped worldwide.