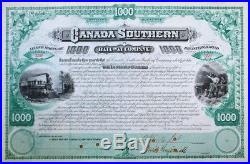 This is a bond certificate for the’Canada Southern Railway Company. It was printed by American Bank Note, has two vignettes and measures about 13.75″ x 9″. Lightly cancelled with two punch holes on the signature. Cornelius Vanderbilt II (November 27, 1843 September 12, 1899) was an American socialite, heir, businessman, and a member of the prominent United States Vanderbilt family. In his turn he succeeded them as head of the New York Central and related railroad lines in 1885. He had a reputation as something of a workaholic, though a stroke in 1896 compelled him to reduce his active business involvement. In 1867 he married Alice Claypoole Gwynne (18451934) whom he met at St. Bartholomew’s Episcopal Church where both taught Sunday School. Their eldest child, a daughter named Alice Gwynne Vanderbilt, was born in 1869 but died of a childhood illness in 1874 at the age of five. Their second child and eldest son William Henry Vanderbilt II (18701892) died of typhoid fever while a junior at Yale University, and Cornelius endowed a large dormitory there. He disinherited his second son Cornelius Vanderbilt III (18731942) for marrying without his approval. Third son Alfred Gwynne Vanderbilt (18771915) went down with the RMS Lusitania. His remaining son was Reginald Claypoole Vanderbilt (18801925), the father of Cathleen Vanderbilt (from his first marriage to society debutante Cathleen Neilson) and socialite & fashion designer Gloria Vanderbilt (from his second marriage to Gloria Morgan Vanderbilt) He is the grandfather of CNN television news anchor Anderson Cooper and his late brother, Carter Vanderbilt Cooper. By all accounts, Reginald was a lazy, alcoholic wastrel who wasted millions of dollars from his family inheritance on women, liquor, fine food, automobiles and other lavish “toys”, and especially gambling. Cornelius Vanderbilt’s two surviving daughters were Gertrude Vanderbilt Whitney (18751942) and Countess Gladys Vanderbilt Széchenyi (18861965). The fabulous Fifth Avenue mansions he, his brothers, and his sons lived in have been demolished, but the Newport, Rhode Island vacation home he built, The Breakers, still stands as a memory of the lifestyle of Cornelius Vanderbilt II. Vanderbilt was active in numerous organizations including the YMCA, Red Cross, Salvation Army, Trinity Church, St. Bartholomew’s Church, and the Newport Country Club. On his death, family leadership passed to his brother, William Kissam Vanderbilt. His philanthropy had been such that he did not increase the wealth that had been left to him. See my OTHER STOCKS AND BONDS! GUARANTEED ORIGINAL – NO REPRODUCTIONS! The item “CORNELIUS VANDERBILT II Autograph 1880 Railroad Bond Certificate-Canada Southern” is in sale since Sunday, March 5, 2017. This item is in the category “Coins & Paper Money\Stocks & Bonds, Scripophily\Autographs”. The seller is “gold-coast” and is located in Brentwood, Tennessee. This item can be shipped worldwide.