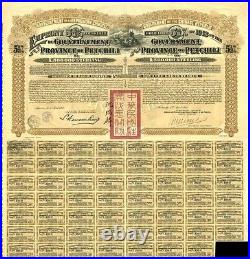 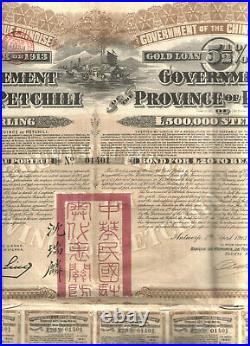 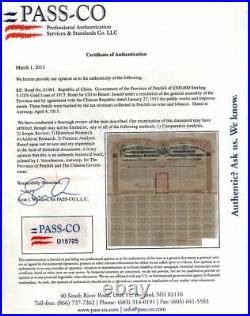 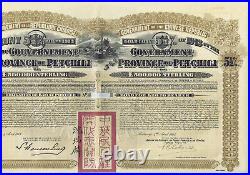 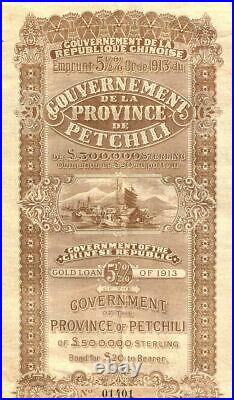 Super 20″ x 20″ 1913 Province of Petchili 20 Pound Bond! CHINA’S #1 “SPECULATIVE” BOND! Huge Historic earth tone Gem! Mint – 1 of the Finest! Includes Certificate of Authenticity and Registration from Pass-Co! All Photos are Generic. HOLD LIVING CHINESE HISTORY IN YOUR HAND! AND POSSIBLY A FORTUNE! Created by virtue of a resolution of the Assembly of the Province of Petchili. This is one of the most important bonds in the history of the Republic of China (now the Peoples’ Republic of China). It’s a Government Bond (not a private one) that was issued by the capital Province of Petchili which is comprised of the City of Peking (now Bejing)! The bond is PAYABLE IN GOLD and GUARANTEED BY THE CHINESE GOVERNMENT but, in spite of possessing all but 1 interest coupon, it has never been redeemed!!! China defaulted when it went Communist! The legal redemption value is astronomical no matter how it’s calculated. We can’t guarantee that it will ever be redeemed although Trump has indicated his willingness to offset China’s debt to American bond holders by “debiting” their current U. Treasury holdings which are practically limitless. Even if Biden has a friendlier stance toward China, the issue of Chinese bond debt is not going to go away. This is why we hold on to as many of these as we can. Only time will tell if we are making the right move. Meanwhile even if China never pays 1 penny the bond itself will likely appreciate over time as a collectible due to its significant history and rarity (only 25,000 were issued and almost all of the few extant are in the hands of private investors – we have heard of the bond being used as collateral for loans or for business deals). In addition to these assets the bond is beautifully engraved in rich earth tones with hand signatures by top Govt Officials, calligraphy and a red chop. Its vignette (steel engraved illustration) depicts century old junks in the harbor. In the right frame it LOOKS like it cost a fortune! But because official redemption did not occur after “Basel 5″ the price has steadily declined in the intervening years and is now back at the pre-speculative price – the perfect time to invest!! Basel 5 was a Convention in Basel at which China was LEGALLY REQUIRED to pay its antecedent foreign debt to qualify for further international debt issuance but nonetheless failed to do so, claiming that Taiwan is responsible for the debt of the Republic. Meanwhile Communist China has always claimed that Taiwan is a part of the nation of China and its economic and cultural ties to Taiwan have only strengthened over the past 3 decades. China can’t have it both ways forever. In addition to Trump’s support of making China pay American bond holders there is international litigation underway to force China to pay. Such litigation for 1913 Re-Org Bonds SUCCEEDED in the UK under Prime Minister Thatcher! 40 years later, with steady inflation and gold prices at 4-5 times what they were at that time the minimum settlement figure would have to be proportionately higher, but would probably still be far below the legal redemption value. This value can be calculated by simply compounding the face value at the guaranteed interest rate of 5.5% annually from 1913 to present OR by compounding the gold value of the bond from then until now at the ever-increasing price of gold. Exceptional condition that’s among the finest known, perfect for archival framing! When we started collecting these over 20 years ago we cherry picked the very best ones from what few we could find. Frame it and enjoy watching it appreciate or, just maybe, be “called in” for redemption for what’s rumored to be an unearthly price. Comes with Pass-Co Certificate of Authenticity and forgery-proofed with a holographic mark. This is the real thing folks!! Don’t tempt fate by not grabbing it now. When you see business news sites flashing news of redemption, it will be too late. Again, NO guarantee is made as to the bond’s alleged speculative value. For security reasons, speculative “live” bearer bonds are non-returnable. These should not be revealed unless and until the bond is resold or redeemed. The item “HUGE HISTORIC CHINA PETCHILI BOND w PASSCO US SELLER! MINT COND! Scan is Generic” is in sale since Thursday, December 17, 2020. This item is in the category “Coins & Paper Money\Stocks & Bonds, Scripophily\Government & War Bonds”. The seller is “collect-a-thon” and is located in New York, New York. This item can be shipped worldwide.