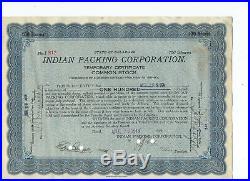 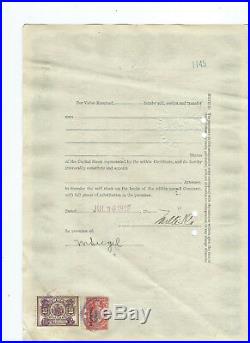 This is the only #812 individually numbered legal certificate, signed and dated from 1919, only days before the company sponsored the first Packing Company football team in Green Bay Wisconsin, now the Packers! Indian Packing Corporation was only incorporated days before this certificate was issued! BEYOND AMAZING that ANY OF THESE EVER SHOWED UP. Not only because near 100 years ago but the company was just formed and sponsored football team only days later and company would get bought out in less than 2 years! A small number of these were found and don’t delay! See the Cliff’ Notes’ Christl notes on the Green Bay Packers website for more information! Amazing 100 shares of Indian Packing on a temporary certificate Autographs, dated and numbered! ACTUAL CORPORATE SEAL embossing on this in bottom left corner. Easily seen from the back side. This has more creases/folds see scans. Getting to the end on these. GREAT FRAMED No tears FEW LEFT!! Curly Lambeau was back in Green Bay after the 1918 Notre Dame football season (shortened by the flu epidemic), was over. Curly starred at East High in 1916 and decided ND and Knute Rockne, George Gipp, Hunk Andersen and a ton of other superstar pioneers of the gridiron is the place to be. Curly was offered a supervisor job at the INDIAN PACKING Company with Council Brand meats. Curly talked his employer into sponsoring the professional football city team of Green Bay Wisconsin starting with the 1919 season. This will look great framed for your man cave woman cave den office Packer room sports bar. Way better than program pennant or autograph from some superstar hot shot QB. Way tougher than baseball or basketball sports memorabilia. Indian Packing had locations in GB and also Indiana and Providence Rhode Island- based out of Delaware. Indian would merge with Acme Packing Corporation in 1920 and Acme sponsored Acme Packers’ in 1921 and original NFL team. APFA until name change! It was pass the hat and hope it didn’t rain. WHO HAS ONE OF THESE? Be the only one on your block or share with a FRIEND! Some years ago, a small number were discovered and a certificate has been pictured in numerous books on early Packers History and YOU have a CHANCE to OWN ONE. Make close offer and I may accept. Better than Favre or Rodgers autograph- they keep signing. Certificate have actual real signatures along with facsimilies. THIS IS NOT A COPY. PLEASE look closely at date stamps, couple of punchholes that are used when certificate redeemed. This has embossed corporate seal on bottom lower left- hard to see- but its there to guarantee corporate signature. T One of these certificates is featured in several books about the history of the Green Bay Packers football team. VERY LITTLE EXISTS from the early days of the company or the football team. A few of these were unearthed several years back and this may be your only chance to own this heirloom from sooo long ago! Indian Packing sponsored the Green Bay football team in 1919 and 1920 but this company merged with Acme Packing Co in 1921! Acme Packing in 1921 sponsored the NFL Acme Packers. Indian Packing Corporation had locations in Indiana, Titletown USA and Providence Rhode Island! The Packers would eventually play the Providence NFL football team named the STEAMROLLERS. The Steam played some games at a bicycle race track! Indian was headquartered in Chicago and Stock issued for Corporation from Delaware. New England Supply Co was one of the major shareholder’s of Indian before merger with Acme. The cancellation is there. NEWS FLASH- The GREEN BAY PACKERS HALL OF FAME in Titletown has 1 of these certificates as a main focus in THEIR 100 YEARS ANNIVERSARY DISPLAY!! The Pack has virtually nothing from the early years- anything pre-1925! Some newspapers and that is about all. IF YOU WANT ONE DO NOT DELAY or risk missing out! Aug 12th was Packers 99th year! SIGNIFICANT HISTORICAL LEGAL DOCUMENT- 5,000,000 + shares of today’s Packers stock but nearly NONE of them has this certificate so HURRY! The item “1919 GB PACKERS FOOTBALL sponsor INDIAN PACKING CO Stock CERTIFICATE GREEN BAY” is in sale since Monday, January 21, 2019. This item is in the category “Sports Mem, Cards & Fan Shop\Vintage Sports Memorabilia\Publications\Programs\Football – NFL”. The seller is “packdynasty” and is located in La Crosse, Wisconsin. This item can be shipped to United States, Canada, United Kingdom, Denmark, Romania, Slovakia, Bulgaria, Czech republic, Finland, Hungary, Latvia, Lithuania, Malta, Estonia, Australia, Greece, Portugal, Cyprus, Slovenia, Japan, China, Sweden, South Korea, Indonesia, Taiwan, South africa, Thailand, Belgium, France, Hong Kong, Ireland, Netherlands, Poland, Spain, Italy, Germany, Austria, Bahamas, Israel, Mexico, New Zealand, Philippines, Singapore, Switzerland, Norway, Saudi arabia, Ukraine, United arab emirates, Qatar, Kuwait, Bahrain, Croatia, Malaysia, Brazil, Chile, Colombia, Costa rica, Panama, Trinidad and tobago, Guatemala, Honduras, Jamaica, Viet nam.