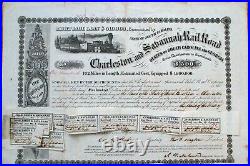 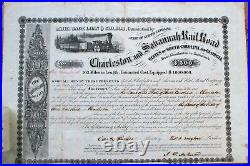 This is an original, early bond certificate. It is signed by Confederate Brigadier General Thomas Fenwick Drayton as president. COMPANY: Charleston and Savannah Rail Road, States of South Carolina and Georgia. DATE: Issued in 1856 it is number 100. CONDITION: Generally clean light wear and the original, even folds. It has a small bit of fold split and nine individual coupons are attached with a single piece of clear tape at the lower-left. It measures about 15″ x 10″. From Wikipedia on Drayton. Thomas Fenwick Drayton (August 24, 1809 – February 18, 1891) was a planter, politician, railroad president, and military officer from Charleston, South Carolina. He served in the United States Army and then as a brigadier general in the Confederate States Army during the American Civil War. His brother, Percival Drayton, was a Naval Officer and fought on the Union side during the war. Drayton was a native of South Carolina, most likely born in Charleston. He was the son of William Drayton, a prominent lawyer, soldier, and US Representative. In 1833, William Drayton took all the family but Thomas, who chose to stay in the South, to Philadelphia, Pennsylvania following the Nullification Crisis, as he was a unionist. Thomas’ grandfather, William Drayton, Sr. Drayton graduated in 1828 from the United States Military Academy, where he was a classmate of Jefferson Davis, who became his lifelong friend. Drayton was commissioned as a second lieutenant in the 6th U. He was a captain in the state militia for five years. Drayton was elected to the South Carolina state legislature and was an outspoken supporter of states rights and slavery. He eventually owned 102 slaves at Fish Hill Plantation, which his wife had brought to their marriage. While a member of the South Carolina State Senate, Drayton also was President of the Charleston & Savannah Railroad from 1853 until 1856. In 1832 Drayton married Catherine Pope of a wealthy planter family in Edisto, South Carolina. Her family owned Fish Hall Plantation on Hilton Head Island. The Draytons had several children. Two of Drayton’s sons also served in the Civil War. Drayton was appointed a Brigadier General in September 1861 and placed in command of the military district at Port Royal, South Carolina. Drayton subsequently used “Fish Hall Plantation”, which his wife owned, as headquarters in the defense of Hilton Head Island. Drayton assigned many of his own 102 slaves on the island to construct defenses and do other work to support the Confederates. Thomas Drayton’s son, Lieutenant William Drayton, also fought with the Confederates in defense of the forts. After a lengthy bombardment, both forts fell to the Union attackers, who subsequently occupied much of the region. They gained an important deepwater port in coastal Carolina. For the remainder of the war Union naval operations against First Battle of Charleston Harbor and the Union Blockade were both supported by the port. In 1862, Drayton was assigned command of an infantry brigade composed of the 15th South Carolina Infantry, the 3d Battalion S. And three Georgia infantry regiments: the 50th and 51st and Phillips’ Georgia Legion. The brigade joined the Army of Northern Virginia after the Seven Days Battles and became part of the Right Wing of the Army of Northern Virginia under Lt. Drayton led his brigade at Second Bull Run and in the Maryland Campaign. Lee became displeased with Drayton’s performance. Drayton had failed to get his brigade into action at Second Bull Run, and it was then driven from the field in panic at both South Mountain and Antietam. The brigade was broken up and its regiments transferred to other brigades. Drayton himself was transferred to the Western Theater to command a brigade in Sterling Price’s army. Following the surrender of Confederate forces in the spring of 1865, Drayton moved to Dooly County, Georgia, where he managed a plantation. Drayton was president of the South Carolina Immigrant Society until shortly before his death in Florence, South Carolina, at the age of 81. He was buried in Elmwood Cemetery in Charlotte. Drayton is commemorated by a historical marker erected in 1985 by the state of South Carolina near Hilton Head in Beaufort County. GUARANTEED ORIGINAL – NO REPRODUCTIONS! See our OTHER AUTOGRAPHS. See our OTHER STOCKS AND BONDS. This item is in the category “Coins & Paper Money\Stocks & Bonds, Scripophily\Transportation\Railroads”. The seller is “gold-coast” and is located in this country: US. This item can be shipped worldwide.