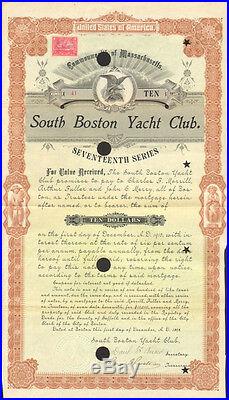 Old Stock Yard Collectible Stock and Bond Certificates. South Boston Yacht Club. 1898 – Boston, Massachusetts Attractive certificate with beautiful vignette Hand signed by the Secretary and Treasurer. On February 5th, 1868, less then three years after the end of the Civil War, Captain John Greer and a group of his fellow yachting enthusiasts met in Arthur Scotts boathouse on the South Boston shoreline between K and L streets to organize the South Boston Yacht Club with a roster that year of 59 members. The following summer a new building on the shoreline at the foot of K Street was built at a cost of five hundred dollars and it was dedicated on July 15, 1869. Less then three years later on February 7, 1870, this building was physically moved to 6th street at the corner of Farragut road, where better location and facilities were offered for yachting. In those days, the granite retaining walls along the beach between N Street and Farragut Road did not exist and the water at high tide would have completely covered what is now the Center Island on Day Blvd. The entrance to this clubhouse was on 6th street and the building extended across what is now Day Boulevard and Kellys landing. The southern part of the club was built on pilings and suspended over water. The significance of memorial day as the choice for our official opening day exercises each year, becomes more interesting when one considers that on May 30th 1868, less than four months after the clubs founding, General John A. Logan of the Grand Army of the republic issued orders that this day be observed by all his department Commanders by decorating the graves of the fallen comrades, thus inaugurating Memorial Day. In 1899 the club found itself sitting in the middle of what today is Day Boulevard as work on what was then called the Strandway rapidly approached clubs location. The clubhouse was demolished and in return the City of Boston granted its current location with a waterfront of 200 feet in a lot depth of 100 feet. Two wings were added to the main building in 1900, and a large western wing with four bowling alleys and 103 Lockers was completed in the year 1901. In 1901 the clubs membership roster was 315 members and 150 yachts. In the year of 2000 we are pleased to have 476 members and we celebrate our clubs 132rd year. Old Stock Yard Policies and FAQs. Items are sent via U. Usually first class, but occasionally priority or parcel post. Policy, my listings are setup to accept. Are you your certificates authentic or copies? Everything I sell is original and authentic. I do not sell copies or reproductions. Is the certificate pictured the exact one I will receive? Occasionally, I do list certificates of the same type without rescanning. In this case, the certificate you receive will be virtually identical same color, size, vignette, etc. To the one pictured. What is the best way to store, protect, and display my certificate collection? The best thing, by far, that I have come across for storing certificates are profolios and sleeves made by Itoya. I have several sizes available. Do the certificates you sell have financial value? The item “South Boston Yacht Club 1898 Massachusetts $10 bond certificate” is in sale since Sunday, June 1, 2014. This item is in the category “Coins & Paper Money\Stocks & Bonds, Scripophily\Entertainment & Sports”. The seller is “oldstockyard” and is located in Jacksonville, Florida. This item can be shipped worldwide.